You are here: Home » Dating Advice and Tips » Don’t Text That Man! – Introduction 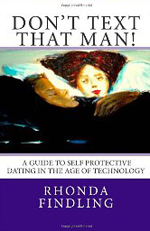 When I wrote Don’t Call That Man! more than a decade ago, there were only three ways to contact a man you had broken up with or who had broken up with you. Either you’d call him on the telephone, see him in person, or you could write him a letter, put a stamp on it and mail it. Today’s technology has totally changed the world of relationships.

Although the internet has enormously transformed our lives for the better it has also become an alluring irresistible playground and gathering place for psychologically challenged men who may be socially inappropriate, mentally injurious, sexually challenged, psychiatrically ill, character disordered, and generally messed up. A woman’s time and energy can be wasted by email bantering or texting with a man who can vanish, then reappear with ease by assuming aliases and nicknames.

Even men with the most minimal social skills, who couldn’t get a date in high school, can attract a woman on his Facebook page with an illusion he’s created. He can seduce with texts equivalent to great poetry while having simultaneous flirtations with multiple women.

Some men have told me that women are more dispensable than ever. It’s as if they’re “in a candy store”. These men declared that they don’t even have to bother working on relationship issues with women they’re involved with because, if things don’t work out, there’s always another available woman they can meet on a dating website or Facebook.

Books like He’s Just Not That Into You, which was widely promoted and championed by media and talk shows, do not help out the situation. It’s an insult to women traumatized by men who chased, seduced and even proclaimed their love, to ultimately have a bait and switch pulled on them. The rules and explanations from these simplistic books don’t take into account the multidimensional forces and dynamics that take place in relationships between men and women in our current culture. Nor do they acknowledge the large body of psychological work and psychoanalytic literature written about relationships by some of the most brilliant clinicians of the past century.

Let me say right here as a psychotherapist, who’s clocked in thousands of clinical hours treating both men and women, that there are many men who are very much “into a woman” but have some part of them that prevents them from attaching. They have a compelling need to sabotage and destroy connections with women as they become closer and their relationships start to deepen.

I‘d like to clarify that the men with intimacy problems I will psychologically explore in this book are not monsters and psychopaths out to harass you, murder, kidnap your children or take your life savings. This is not a book about men right out of a Lifetime TV movie. Don’t Text That Man! is about men who are human but have attachment issues and severe problems with intimacy. I am writing about men we fall in love with and then unfortunately have to get away from to emotionally survive. Men, who can be amazing and even loving, but have an inability to form stable and satisfying relationships.

Don’t Text That Man! is based on my psychotherapeutic work and communication with thousands of clients and readers of my books from all over the world. I have also attended conferences on love, sexuality and relationships throughout the US and Europe where I listened and spoke to the most prolific psychoanalysts and behavior theorists of our time. I have recently started to present my own workshops on my clinical work at these conferences.

Don’t Text That Man! will validate and explain many of your demoralizing, traumatic experiences with men. It will transport you out of the victim position. Don’t Text That Man! will empower you by offering more insight into men to determine if a man, you are interested in or involved with, has the emotional capacity to sustain a grownup, mature, viable relationship. It will help you prevent yourself from getting hurt or, at the very least, minimize the odds.

I describe the signs, behavior and traits of Malignant Men so you don’t take their behaviors so personally and get too deeply wounded. You will be able to separate which is about you and what is it about him and his issues. It will help you determine when you should fight for a relationship with a man and when you should walk away. Don’t Text That Man! will also help you try to relate in a healthier way to Malignant Men if you do decide to try to work it out with him. You will also learn how to deal with feelings and thoughts that might be causing you to act self-destructively with men.

I don’t believe in the concept of “next’ as a form of coping. Men are not interchangeable objects. If you love and adore a man (despite his pathology), it can be very hard to quickly find another man to replace him. Maybe some women are lucky enough to detach instantly and find a new love so fast. However, being unable to find a new relationship can bring further frustration, shame and feelings of inadequacy and deprivation on top of the loss you are already struggling with.

Even with all the social and economical advances women have made, deep down most women still long for love from a man. It’s part of the human condition. However, due to the new technological world we are living in, women truly need to be smarter and more self-protective than ever before. It can be done. Don’t Text That Man! will teach you how.

This is an excerpt from “Don’t Text That Man: A Guide To Self Protective Dating in the Age of Technology “
– Introduction