You are here: Home » Dating Advice and Tips » Pancakes Taste Like Poverty

... Sometimes you just have to go.

Three kids, no job, no education, no furniture, no plan - that was me. 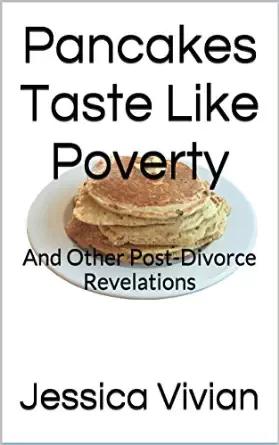 I'd been a stay-at-home mom for the majority of my shaky relationship with my ex-husband. It was a relationship that started when I was barely out of high school. He and mothering were all I knew. I also knew that my marriage was unhealthy, bordering on abusive. But I was afraid.

That is the basis for my real-life account, "Pancakes Taste Like Poverty: And Other Post-Divorce Revelations." This memoir is a collection of my innermost thoughts and struggles collected from years worth of my blog posts and journals. Sometimes painful, sometimes hilarious and sometimes maddening this book touches on everything from absent dads to parenting to post-divorce dating. But most importantly, this book is about community, rebirth and love. I learned when you want a support group, you sometimes just have to go out and create it. I learned that even slow progress is progress. And most importantly, I learned that it is genuinely never too late to fall madly, deeply, head-over-heels in love...with yourself.

There is no chocolate and wine, there are no trips around the world, no Tarzans to swing in and save the damsel. What you will find in "Pancakes Taste Like Poverty: And Other Post-Divorce Revelations" is honesty, struggle, triumph and survival.

Find Pancakes Taste Like Poverty: And Other Post-Divorce Revelations, by Jessica Vivian on Amazon

Jessica Vivian grew up in Mobile, Alabama. She escaped to Tampa, Florida where she attended the University of Tampa long enough to fall for a bad boy and marry him at age 20. They had three children together before she realized one should never marry a bad boy and they divorced after a ten year relationship. This experience is the basis for her memoir, _Pancakes Taste Like Poverty: And Other Post-Divorce Revelations_.

As a full-time returning college student and homeschool mom, she's often found with her nose in a book or gossiping at a homeschool meetup. Other times she can be found watching re-runs of Matt Smith's episodes of Doctor Who, trying her best to memorize the lyrics to K-pop songs, over-analyzing the impact of her Myers-Briggs personality type on her interpersonal relationships, or planning to travel the world with her kids.

I think I could probably walk into a job making about $10/hr with my background in hospitality and rooms operation. So if I worked full time at a local hotel, I might bring home $400/week before taxes. The cost of before and after school care for three children – which I would need to work a day ... END_OF_DOCUMENT_TOKEN_TO_BE_REPLACED

I've been single parenting for about three years now. I have a lot of help. And even with all that help I'm still overwhelmed. But what I'm doing is nothing compared to what some of my homegirls are going through. Here's the thing. When a kid goes and shoots up a school, or robs a Circle K and ... END_OF_DOCUMENT_TOKEN_TO_BE_REPLACED

Paralysis There is this strange dueling that goes on when you reach this stage of simultaneously feeling ready to date again, but also complete terror of even speaking to the opposite sex ever again. Maybe that's a little melodramatic. My landlord is a dude and I can speak to him just ... END_OF_DOCUMENT_TOKEN_TO_BE_REPLACED

Repulsion I became repulsed - completely repulsed - by the idea of sharing my space, my life, my bed, my words, my ideas, my opinions with another man ever, ever, ever. Everything every man ever did annoyed the living shit out of me. I was not the girl to vent to. If you said, "Ugh, my ... END_OF_DOCUMENT_TOKEN_TO_BE_REPLACED

I have never been a romantic comedy girl. In 9th grade, Natural Born Killers was my favorite movie. I can still recite it. After that, indie character studies and documentaries became my go-to types. I refused to watch the Notebook. It took years and a handful of guys telling me "no for real, this ... END_OF_DOCUMENT_TOKEN_TO_BE_REPLACED

Being alone is hard. Most people who get divorced aren't alone for long, gleefully flinging themselves into one anesthetizing tryst or soon-to-fail relationship after another. But those of us who lean toward masochism choose to hunker down and run headfirst into "dealing with our issues." ... END_OF_DOCUMENT_TOKEN_TO_BE_REPLACED

I looked at my life as someone's wife: I didn't finish college. I quit a job I was good at and that I loved, to support my husband's goals. I was forty pounds overweight. I was sleepy. I was angry. I was vengeful. I was getting migraines. I was miserable. And one day, I will die. There is ... END_OF_DOCUMENT_TOKEN_TO_BE_REPLACED

Excerpt from Pancakes Taste Like Poverty: And Other Post-Divorce Revelations, by Jessica Vivian. What's interesting about leaving a marriage is that what looks like the end is never the end for the person who's choosing to go. My eventual acceptance of my dead marriage came in the form of a ... END_OF_DOCUMENT_TOKEN_TO_BE_REPLACED