You are here: Home » Dating Advice and Tips » Dating and Relationships with Kristy » Single Moms And Younger Men 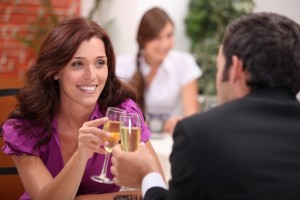 other to enter into a serious relationship with a younger man. I’ve even received e mails from children of mothers asking the same thing. In short, this is what I say. If you’re genuinely happy with him, how could it be wrong? I think it’s perfectly okay for a single mother to be with a younger man. I’ve been in relationships with younger men and I’ll admit that while hesitant at first (due to lack of experience), I’ve come to love what younger men can offer and the reason my relationships with these younger men did not last had nothing to do with their age.

So first, let’s discuss why many think it’s a problem. Older women tend to see younger men as immature and inexperienced. We’ve created this unfair image of a teenager-esque boy who lives in his mom’s basement playing Super Mario all day and then drinking cheap beer and dropping stupid pickup lines on anything with boobs til the early morning hours of the next day. And while this stereotype is true for some younger men, it’s also true for some older men too. So it’s not fair to “judge a book by it’s cover” so to speak.

Also, we tend to be too critical on ourselves. We think that younger men aren’t going to want anything long term with an older woman. Yeah sure, of course they all want the “cougar” experience but they’ll never stick around when there’s plenty of younger girls out there with cheerleader bodies. We think this and in doing so, we shut the possibility of any such experience down before there’s any chance at all. Not to mention our confidence takes a hit when we limit ourselves due to negative beliefs.

We also think that this could have a negative effect on our children. We think that having a younger man around will seem irresponsible of us and that our children won’t respect him or us. We think that we have to be with men who are the ideal father package and we value stability over adventure when it comes to who we think we want around our children.

An individual’s maturity level is unique to them and you cannot judge one’s maturity by their age alone. I’ve dated a lot of younger men and I can say that the one common thing amongst them all…they’re fun! They’re full of energy, fun and spontaneity. A lot of people can see these traits and relate them to being immature. For example where the younger guy might not have a problem staying out late before they have to get up at 6 a.m. the next morning for work, the older man might prefer to call it an early night. But don’t knock a spontaneous late night full of living in the moment without any cares for the next day before you try it! I’ve found complete bliss in throwing caution to the wind in exchange for a night of fun and it wasn’t until I dated younger men that I discovered the true joy in being a single mom rebel. Fun and full of life does not equate to immaturity and can inspire you in ways you’ve never imagined.

They say that “beauty is in the eye of the beholder” and I say the only opinion that matters regarding your beauty is your own. If you see yourself as beautiful and you stay pro-active in feeling beautiful, then you can be beautiful at any age. You are amazingly and uniquely beautiful. Your beauty is indescribable in words and different than that of any other and therefore cannot be confined. When you feel beautiful, you carry yourself in a way that inspires others to see and be attracted to your beauty. So if you are feel any less than beautiful or are looking for others to make you feel beautiful, then you need to look inside yourself and do whatever you need to do to feel more beautiful. This can be anything from devouring a rich piece of chocolate to getting fake boobs. Whatever inspires you to feel more beautiful…do it! And when you feel beautiful, the rest of the world will see your beauty. Young and old, beauty has no limits on who it inspires and yours could very well inspire that young stud just as much as the older stallion.

So ladies, when it comes down to it, age doesn’t matter. How he makes you feel is what matters. And that is all that matters. Don’t limit yourself to any specific age group because you may very well be missing out. I’ve dated plenty of younger men (and they’re actually my natural preference now) and I can tell you that younger men are just as capable of having a meaningful relationship with you as any older man. So give it a try and be adventurous! You never know what could happen.