You are here: Home » Single Mom Stories » I Spend Too Much Money on Food 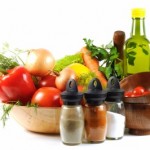 We eat a healthy non-GMO diet, mostly organic, so I don’t expect our food to be cheap.  I’d really like to lower my food budget, but I’m not sure how to.  I recently read a food article buy a woman who feeds her family of 6 (5 of whom are boys with double-digit ages!) on $600 a month.  Sadly, that woman puts me to shame.  Her family eats mostly organic, and they do have a huge garden and fruit tress that they preserve the harvest from, but they don’t eat much meat, and they do eat a lot of noodles.  Unfortunately, that wouldn’t fly at my house.  Not to mention, food in her area of the country is much cheaper than it is here.  (One example, my eggs cost over double the amount that she pays for her eggs.  Don’t even get me started on the price comparison for fruits and meat.)

My kids are still young, but they sure do eat a lot.  And they’re not only picky, but one of them also has food allergies.  I have to try to cook food that both tastes good and is safe for my family to eat, and that’s quite a challenge.

My oldest detests cheese, noodles, anything pickled, and anything spicy.  My middle child refuses meat, but loves her cheese and carbohydrates.  My youngest is wonderful because he likes most things.

I think one of the reasons I spend so much money on food is because in trying to please everyone, every meal turns out to be a feast in which I prepare a main dish with multiple side dishes so that there’s sure to be something that everyone will eat.  Seriously, aside from their own variations on tacos, there isn’t a single meal that they all like.  (When we have tacos, my oldest eats a crunchy taco shell with meat and lettuce, while her brother eats a soft shell with everything but meat, and her sister eats a crunchy shell wrapped in a soft shell and filled with cheese, tomatoes, and sour cream.)

Yes, it’s most likely my fault for letting my kids get so picky instead of just telling them to eat what’s on the table, but I swear they’d go on a week-long hunger strike if I did that.  Trust me, I’ve tried, but I worried they would starve if I didn’t cave.

Getting back on subject, my goal is to find some healthy, inexpensive, kid-friendly recipes to make for the month of February.  I know I’ll experience some resistance at first, but I’ve got to try.  I’m hoping that making a meal calendar in advance will help me to plan my meals and shopping list, and perhaps swap out some more expensive meals for less expensive ones.  So, I’ve got my meal calendar made.  Now I’m going to see what I can change on it to make it less expensive yet equally nutritious.  I know I won’t be able to cut my food budget in half in a single month, but by planning ahead with my meal calendar, I’m hoping to whittle it down a little bit every month until it’s at least close to what I want it to be.