You are here: Home » Dating Advice and Tips » Dating and Relationships with Kristy » Why He Becomes Distant After Getting Close

Have you ever had the most magical night with the guy you’re seeing and you were taken completely off guard by his confession that he loves you only to have him disappear the next day? Wonder where he went? Chances are he’s sitting in his “man cave” wondering why he revealed his deep dark secret to you and how he’s supposed to fix this potential threat to his freedom. It sounds ridiculous, I know! For women, confessing our love and feelings for the first time is exciting and happy! For him, it’s the realization that his freedom is at stake. 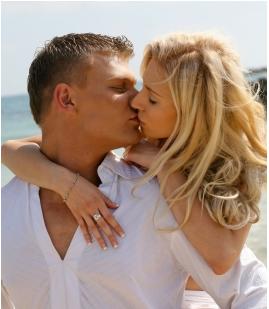 Men are problem solvers. Men value their freedom and their accomplishments in life. When he is faced with a problem that he ultimately is able to solve, whether it be at work or in his personal life, this is an accomplishment for him that is worthy of value to his manliness. And their freedom? A man’s freedom is what makes him feel safe. It’s his way of expressing his competence and ability to be independent. A man who feels free doesn’t feel threatened by others desires to control him.
So when a man is faced with a problem, he is naturally inclined to solve it (because if he does, this is an accomplishment). And when he openly reveals his love for a woman (who may possibly turn into a psycho possessive controlling witch), he is consequently putting his freedom at risk. This is a problem for him! He knows one of two things could happen. Either you could stay the incredibly confident, self-sufficient and totally cool woman he’s fallen for or you “claim” your territory and become controlling and demanding like a lot of women do.

Women are problem creators. We are naturally emotional creatures who wear our hearts on our sleeves and this is a good thing! Being emotional is how we provide nurturing for all these men when they feel like they’ve failed at something. But being emotional can also push a man away. As emotional women, we value our relationships with others. Feeling close to and needed by someone is what makes us feel valuable. And how can we be sure that we are close to someone unless they reassure us? So when we feel the need for reassurance, we create a situation that warrants it. Maybe we complain about him not spending enough time with us or not being at our beck and call when we were sick with the flu. Or when he says “I love you” and follows it up with days of silence, we become clingy little stalkers! Then he has to reassure us of how much he loves us right? Wrong! When we do things like this, it’s a threat to his freedom. It screams controlling! And it makes him want to retreat to his man cave and avoid us.
Another important thing to remember that applies all of this to single moms is that for most men, falling in love with a single mom is even scarier than falling in love with a woman who has no kids. Not only is he beginning a relationship with you but he’s ultimately beginning a new relationship with your children (another potential threat to his freedom). If he really loves you, this won’t be an issue in the long run but for most men, coming to trust his ability to provide a fulfilling relationship for a single mother can be a timely process.

So when this happens, what do you do? Two words ladies…trust and patience. If you love him, then you trust him and if you trust him, then you know he’s not going to leave you hanging. He’ll be back. He’s just given you an opportunity to take some of his very valuable freedom away and he needs to go to his man cave and work through this fear until he feels safe again. The good news is that you can help him feel safe again by being patient. Sit back, give him his space and let him take the lead. Doing this shows him that his freedom isn’t being threatened. His freedom has to be important to you and if you show him this, then he’ll come to realize that this so called “problem” isn’t a problem at all! It may take days or even a few weeks but if you can be patient, he’ll be back and wooing you again in no time.
Until then, focus on you and fill your time with happiness. Do things with your kids, read a new book or go on a vacation. Turn the energy that your worried little head is consuming inward and ask yourself what makes you happy. Then go out and find ways to provide for your own happiness. Remember that you are worth the love of a great man and the love of a great man is not without complications.