You are here: Home » Single Mom Stories » Back to School with Kristy » A Single Mom In Grad School. It Is Possible!

I think I’ve wanted to go to college ever since I was in elementary school but once high school ended I had dreams of becoming the next big model so I pursued that instead. I even made it in the modeling biz… somewhat but traveling around with the Miss Hawaiian Tropics cult and slaving away every day trying to achieve an impossible physical appearance that would sell was not my idea of a fulfilling life. So after a few years, I retired my 6 inch stilettos and sequined bikinis and decided it was time to take college seriously. But then I got a serious boyfriend who introduced me to the club scene and got sucked up into that whirlwind of drugs, dancing and never sleeping (and no, I’ve never done drugs). 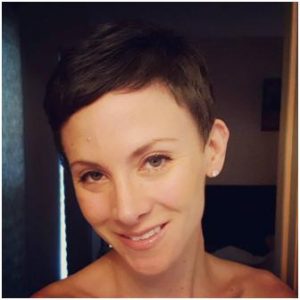 Another few years of being sidetracked and again, I decided it was time to take college seriously. But… then I got pregnant and what a distraction that was. But still, the desire to go to college never stopped burning. I think becoming a mother didn’t exactly settle my wild side but more so tamed and for the first time I felt capable of actually focusing on a college education. Two years later, I had my associates and I was so incredibly proud of myself. I had finally done it!

I was satisfied for a little while but I started to think about getting an even higher degree but as always life was pointing me in other directions. My husband (ex now) wasn’t too keen on the idea of me going back for more because to him, we had too many other things going on. My young children were so demanding of my time. It seemed like the only possible thing to do was settle into and be happy with being a mom and wife before anything else. I mean everyone says that once you have children, you give up your life! I even said that quite a bit. So I buried my desire to go back to school as best I could and attended to the needs of my two kids and husband. This was it, this was the rest of my life and I may as well find happiness in it. Well, that’s exactly what I spent way too long doing, settling for living for others and trying to find happiness in a lifestyle that wasn’t me at all.

I’m much wiser now having been through a marriage, a divorce and raising two children on my own and I never imagined that the most important lesson that I’d learn in life is that you have to live for yourself first. This may sound selfish, especially when you have kids but look at it this way. If you put yourself first, you’re setting the perfect example for your children to learn to put their happiness first from. I stopped living for others and decided that it’s time to finally finish this school thing that’s been eating at me for so long. No more excuses! If you want to go back to school, there are no excuses.

So I’m taking classes now and I’m even working on a research project with the psychology department at OSU. My career as a grad student starts very soon and people ask me all the time how I’m going to do it. After all, I work full time and I’m a single mother. I just look at them, shrug my shoulders or smile and tell them that I have no freaking idea. I really don’t! It seems crazy but definitely not impossible.

I know a lot of you out there want to go back to school but you’re afraid for different reasons such as not enough money, not enough time, lack of confidence, you still believe that others’ lives come before yours etc… So I invite you to join me on my journey through grad school as a single mother. My words cannot teach but they can inspire and I believe everyone deserves to live the life they dream of.   So let my experience inspire you and perhaps encourage you to open a new door in your life. I’m going to regularly update you all on my experiences through grad school and I promise to keep them completely real which means there will be happy posts, encouraging posts, funny posts and I’m sure some angry ranting and raving on my part so if you’re a single mom (or dad) and you want to know what it’s really like to go back to school while being a single parent then come back.