You are here: Home » Single Mom Stories » A Single Mother – My Story 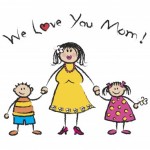 I was terrified. I had been dating this guy for two months. I was only 21 years old. I didn’t really even know him! But I had given him my v-card and now I was having his baby. So (against my better judgement) I married him and had his baby, Luke. Luke had lots of health issues. His sperm donor (SD) couldn’t have cared less. I was a married single parent. I took my tiny, screaming baby to four appointments a week all by myself – two at a Children’s Hospital 110 miles away, and two at a therapy clinic 70 miles away. I struggled to breastfeed him as most of his doctors told me I couldn’t. I took him to have surgery, alone.

I woke with SD and slept with him all the while trying to be a good wife. I cooked homemade meals and kept up with laundry. But the day I took Luke to have surgery and my Mom was the only person who came with me for support – that was the last straw. I was leaving. I would not tolerate nor did I deserve to be treated this way. I had my things packed. I wrote a note and taped it to the TV (where it certainly wouldn’t be missed). I went to stay with my parents. SD didn’t call or text for two days. And when he did, he just said I needed to come back – not that he missed me or Luke or wanted to know what was wrong, just come home. Pssshhh! I am a lot of things, but I am not a pushover.

And then I found out I was pregnant … again. I had a choice to make – tell him what the situation was and what needed to change if he wanted me back, or just give up. I am not one to just quit, so I went back to him after he promised to change. And I continued to be a married single Mom. Then Nathan was born and my world was turned upside down once more. My boys are 11 months and 28 days apart. It was a very difficult time for me – we lived in a crappy little trailer house in a trailer park where the cops knew people by name, and not because they were friends. SD was only working 30 hours a week and playing his Xbox (the tool of satan) the rest of the time. We got evicted. His car got repoed. We were flat broke. My parents would not allow me to move into their house with SD (they never liked him, go figure). So we moved into his parent’s house where his mother criticized me about the way I discipline, breastfeeding after six months, making my own baby food, the way I sorted laundry, …. pretty much everything. I was ready to dig a hole and crawl in it.

Then right before Christmas, my brother got married. He and his wife were and are so obviously in love that it was painful for me to be there. My parents made a toast – may Josh and his new wife Melissa always be as happy and in love as they were that day. That was my breaking point. I didn’t feel as I could ever love SD as my brother loved his wife. I knew it was over and I told him I was through. I never went back.

So I have been living with my parents, working 40 miles away and trying to be the best Mom I can be to my toddlers. And worrying. I worry about how I will ever be able to raise these boys to be great men when their SD is such a pig. I worry about how I will manage when I am living on my own. I worry about the divorce papers I still haven’t finalized – the custody arrangement part is very troubling to me (SD has not seen his children in over three months, and not because I won’t let him). I worry about finding love, and if I do and we have more children, will my current children feel left out? Will I even find a man who is willing to step up and teach two little boys who don’t belong to him how to be men? These are all things I hope to research and write about in this blog and just maybe another single Mom will run across it and think, “Wow, I’m not alone in my fight!” Because that’s what this is; a fight. Every single day is a fight. A fight to keep going it alone while these two precious little lives depend so totally on me.

So I will pray. I will fight. I will cry. And I will press on.