You are here: Home » Single Mom Stories » An Open Letter to My Daughter’s “Father” 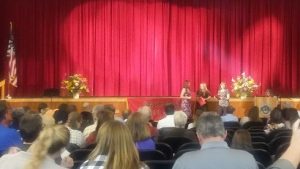 I watched her tell Santa the only thing she wanted was YOU. I felt her pain so deep it was agony. I lived thru it with her, holding her, consoling her, and pretending to make sense out of BULLSHIT for nine long years.

She’s 14 now. And not even close to typical 14. She’s wise and brilliant. She’s mature and defined within herself. She KNOWS now. She understands. And as painful as that realization is to me as a mom, it also brings FREEDOM. I can SAY it NOW. No more silence.

I’d love to bitch about the fact that you sit in a state separate than your children, where you now have another. You sit there and KNOW that you’re not helping in the slightest, no financial contribution towards your daughters whom I work day in and out to provide for, and who DESERVE more than I ALONE can give. But that’s not what this is about. That’ll work itself out, trust THAT.

THIS IS ABOUT YOUR DAUGHTER.

Your daughter, who had a ceremony at school tonight. Only the top 5% of students in her grade were invited. She won an Award for Academic Excellence. It was one of my proudest moments, although she manages to find new ways to make me proud every single day.

As I sat and watched and clapped and cheered, I couldn’t help but think of her heart, praying to God she wasn’t feeling your absence. Sadder still, I don’t think she was. Or, maybe that isn’t so sad after all.

I was never that kind of woman to keep your girls from you. They know that, they SAW it. Even when you lost your license because you refused to take responsibility and be a man, I drove them to you. I picked them up. I took you to kindergarten graduations and birthday parties. I TRIED. Not for you. FOR THEM.

This letter isnt ‘so much about making you feel bad as it is about making my Daughter and I feel BETTER. It’s about the fact that I can finally acknowledge how it was all along. That she can be Free to Feel about it all however she so pleases. She DESERVES that. She DESERVES HER TRUTH. And of ALL the things you’ve taken from her, A DAD, a provider, a protector … you can NEVER take HER TRUTH. Lies live in darkness, and she is Bright as The Moon.

Your daughter was HONORED by her school tonight. You didn’t know that, did you? Realizing how mature she is, you COWER from her, don’t you? You know she KNOWS, and trying, and changing just aren’t in your bag of tricks, are they? Did you know she’s a Track Star? Did you know she has goals, and specific colleges she’s going after? Did you know she would’ve been the best friend you ever could’ve had? I know, because she IS mine.

I don’t think Knowing any of this would be enough anyway. The years pass. The angelic little five year old grew. She grew beautifully, steadily, and strong. She missed you so deeply that it hurt to witness. She loved you so much that it killed me watching her wait.

Then suddenly, she stopped waiting for you. She stopped missing you. I hope she didn’t stop loving, but if she did, no one would blame her.

But since she doesn’t, she got this. A mom who will protect her til my last breath is gone. A mom who will fight for her even when she’s wrong. A mom who is just badass enough to terrify teenage boys, and cool enough to befriend teenage girls. A mom who GETS HER, and IS PRESENT. FULLY. And  I want you to know mostly, more than anything else I’ve said – SHE WILL BE OKAY. SHE WILL BE WAY BETTER THAN OK.

I cried and hugged her tonight as she was being honored by the school. I looked her square in the eye and said “I’m Proud Of You.” I saw that little girl hiding somewhere within her beautiful face and I choked up. But the light in her eyes as she smiled and  said Thank You washed away all of my sadness. We will Always be okay, her and I! I bet you didn’t even know THAT, did you? So now the only sadness I COULD have left .. would be FOR YOU. But I’m too busy being PROUD OF MY DAUGHTER.