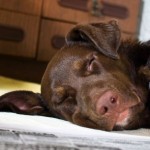 An ACTH stim test is a test for a condition called Addisonʼs disease (otherwise known as hypoadrenocroticism). Addison’s occurs when a dog’s adrenal glands are not functioning properly. It can sometimes be hard to pick up by looking at a dog’s clinical signs because they are very vague and can include:

There are obviously many conditions that can cause these symptoms! But, because Addison’s disease is life threatening we will often test for it if we are not sure on our diagnosis.

An ACTH stim test can cost between $150-$250 to perform. However, I will often have the lab run a single cortisol test before running this test. If the cortisol level is high then it is very unlikely that a dog has Addison’s disease. A cortisol test costs around $30 which is a lot less expensive than an ACTH stim.

However, there are some cases that do need to have a stim done. It’s worth asking your vet whether they could just do a cortisol level, but if they don’t feel it would be adequate then the more expensive test may be necessary.

A Cheaper Test for Cushing’s Disease

Does your vet suspect your dog may have Cushing’s disease (hyperadrenocorticism)?
Cushing’s is a disease seen in older dogs that cause them to have an increase in thirst and urination, appetite and panting. Regular bloodwork does not tell us exactly if a dog has cushing’s disease but if we see an elevation in the liver enzyme called alkaline phosphatase (ALP) it can be a clue that perhaps Cushing’s is present. The way that we test for Cushing’s is something called a low dose dexamethasone suppression test. This test requires a full day stay at the hospital and usually costs somewhere between $150 and $200.

Sometimes instead of doing a low dose dex suppression test I will do a less expensive test called a urine cortisol creatinine level. This test tells us if there is an excess of cortisol in the animal’s body. A dog with cushing’s disease will always have high cortisol levels in the urine. If this test is negative then we can say that the dog does not have cushing’s and we have saved a lot of money. However, if the test is high you may still need to have the low dose dexamethasone test done.

Do You Have A Diabetic Animal?

Dogs and cats with diabetes can be treated quite successfully but often the treatment can be expensive.

There are several ways that you may be able to save money if you have a diabetic animal. Glucose curves and fructosamine tests: Does your pet go to the hospital regular glucose curves or fructosamine tests? If so, you can talk to your vet about doing a glucose curve at home. To do so, you will need to purchase a glucometer which is a small machine that measures glucose levels. The glucometer used is the same as humans use to measure their blood glucose level. Do you know anyone who is diabetic? You can ask if you could borrow their glucometer for a day.

If you do need to buy a glucometer, in many cases the pharmacy will give you a glucometer for free as long as you buy the strips that are inserted to do each individual test. You can ask the pharmacist to calculate which glucometer would be the best deal for you.

There are good instructions for how to perform a home glucose curve at:
www.k9diabetes.com/bgtestvideos.html (for dogs)
www.veterinarypartner.com/Content.plx?P=A&A=605 (for cats)

Before performing the curve it is important to ask your vet how often you need to take a sample.

IMPORTANT!!! It is extremely important that you do not try to adjust your pet’s insulin based on the information you get from the curve. There are many factors that contribute to whether or not we increase or decrease the dose. It is very important that you give the glucose curve information to your vet and have him or her decide whether the insulin dose needs to be changed. Your vet may charge a small fee to interpret the curve but it will definitely be less expensive than having bloodwork done in the hospital.

Insulin syringes:
Do you buy insulin syringes at the veterinary hospital? If so, you can likely get them for less expensive at the pharmacy.

However, be absolutely sure that the syringes are the same size. It is best to buy your first box of syringes at the vet’s office and then take them to the pharmacy to ask for an equivalent.

If your pet is on Vetsulin or Caninsulin for insulin this medication has a special type of syringe called U-40 which does not have a human equivalent. However, your vet can do the math for you to tell you the equivalent dose on a U-100 syringe.

Disposal of sharps:
Has your vet given you a container to fill up to dispose sharps in? In many practices the client pays for a sharps container and when it is filled they bring it back to the clinic and the vet hospital sends it to a medical waste company for disposal. If you are using one of these containers you can snip the needle off of the syringe and just dispose of the needle in the sharps container. This way you can get way more needles in one container.

In many areas, a pharmacy will dispose of needles for free. It is worthwhile to ask your pharmacist if you can bring sharps in to them for disposal.