You are here: Home » Dating Advice and Tips » Don’t Text That Man! – Chapter One: Malignant Men 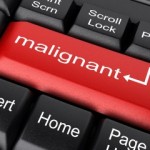 If you’ve ever been left feeling broken, hurt, injured and/or traumatized by a man, then you’ve had an involvement with a Malignant Man.

If you’ve ever had a connection with a man who totally confused you with double messages, then you’ve been with a Malignant Man.

If you’ve ever known a man who was the sweetest nicest guy in the whole world but ended up sabotaging or destroying the connection once you tried to bump it up a notch, then you’ve had an encounter with a Malignant Man.

How Do Malignant Men Sabotage Relationships?

By saying or doing something that ruins your relationship. They can be insulting, rejecting, devaluing, cruel, mean, spiteful, controlling, aggressive, impatient, negligent, emotionally absent, indifferent, rejecting, deceitful, frustrating, sadistic or hurtful. Sometimes they just disappear. They have the capacity to get you to desire them and then push you to the breaking point. It’s an encounter with a Malignant Man that usually brings women to my office or call me for a phone consultation.

Many Malignant Men have tremendous anxiety about women. A Malignant Man might be afraid of being invaded, pursued, punished, engulfed, attacked, destroyed, consumed, upset, irritated and/or intruded upon by a woman. At the very worst Malignant Men see women as castrating, sexually ravenous, manipulative and power hungry. Sometimes Malignant Men are afraid they will be forced to do what they do not want to do as if they have no boundaries.A telltale sign of a Malignant Man — he is usually unaware of, in denial of, or just won’t acknowledge his relationally destructive behavior, no matter how unhappy he is or his obvious lack of successful relationships. He is usually locked into his own subjective reality and often finds any feedback on his way of thinking about relationships as a personal attack. He prevents real contact from being made by using various methods of distancing and evasion, which I will explore in more detail later.

A woman doesn’t have to do anything to trigger his intimacy problems. In fact, the more normal a woman acts in terms of attaching, the more a Malignant Man’s pathology may get activated.

Malignant Men are not “all bad”. In fact they can be wonderful. Even amazing. That’s why we’re drawn to them. That’s why we fall in love with them. They can be irresistible, interesting, talented, brilliant, captivating, sexy, attentive, engaging, fun, promising, sweet, supportive, lovable, paternal and loving. The tragedy is that these healthy characteristics are only parts of them. It’s when you get close and more intimately involved (not necessarily sexually) with Malignant Men their destructive, hurtful behavior becomes activated.

Claire Bloom’s description of her ex-husband, the famous author Phillip Roth, in her memoir Leaving A Doll’s House beautifully captures the essence of a Malignant Man:
“And Philip played that elusive role — one moment an understanding, thoughtful, compassionate, surrogate parent, and next a remote, unyielding, punishing adversary.”

Signs Of A Malignant Man

Limited Empathy For Others
He has a difficult time understanding how you feel. He doesn’t seem to have the capacity or tools to have empathy for others.

Doesn’t Like When You Get Angry At Him
If you get confrontational with him, you are history. You have to stay calm even if you’re enraged.

Doesn’t Like Demands Made On Him
He experiences requests to meet your needs as demands or intrusive. You feel as if you are walking on eggshells when you ask him to do anything.

Doesn’t Like To Be Held Accountable
He finds it difficult to take ownership of his behavior. He will do anything to justify his actions rather than admit he was wrong. Even if it means losing the relationship.

Tendency To Idealize And Devalue
First you’re his fantasy woman. Eventually you do something to disappoint him or he finds something imperfect about you and you’re thrown off the pedestal.

Plays Warped Psychological Games
Sometimes he plays twisted psychological games, which provide interaction and drama, but are a poor substitute for intimacy.

His “Self” Always Comes First
His primary focus is on his “self”. Love and relationships are always secondary, even if he proclaims differently. He’s stuck in his interior world.

Sends You Double Messages
He runs hot and cold. Sometimes he makes you feel like you are going crazy. Push-pull, appear-disappear-reappear, I love you, I can’t stand to be with you.

Has Problems With Closeness And Distance
He creates obstacles to bonding. He may be the guy engaging you on the internet but never wants to meet. Technology now offers many ways of communicating without intimacy, which exacerbates this problem.

Doesn’t Try And Repair Or Restore When Things Go Wrong
If you have an argument or altercation, he seals off into his own world and doesn’t make an attempt to repair or restore the relationship. Often he doesn’t have the relationship skills to try and fix it.

He’s Smug Or Arrogant
His smugness is off the chart. His arrogance has nothing to do with being financially or professionally successful though. He can be poor as a church mouse and still think he’s “all that”.

He’s Unpredictable
You never know what’s up with him. He’s exciting, never boring but very depleting and upsetting. He switches his personality at the drop of a hat.

Entitled
He may be obese, bald, unemployed and on disability but he feels he deserves a woman with Hollywood looks or is thirty years younger than him. He doesn’t appreciate what he had or is being offered.

Limited Self Awareness
He’s not aware of how he sabotages his own success. He has poor insight into himself. He is often in heavy denial, refusing to look at his dysfunctional behavior.

Wants To Be Mysterious
Wanting to be known is avoided and real relating is obviated. It’s easy to fall in love with a man who’s mysterious because you build him up into a fantasy and idealize him.

Very Defensive
He hides behind his psychological defenses. He chooses aggressive self-protection over vulnerability and authenticity.

Frustrating
He can be very frustrating. His needs will always come before your needs.

Immature
Everything has to be his way. He might even throw a tantrum!

Complicated
You often find yourself processing his behavior and your relationship with people in your support system. Often you feel like his therapist. He’s difficult to please.

He “gaslights” You
He tries to get you to doubt your reality. This emotionally abusive dynamic is commonly known in the pop psychology/recovery world as “gaslighting” and refers to the classic 1944 film Gaslight, where a wife, eager for her abusive husband’s approval, believes his reality over hers until she starts to lose her mind.

He Can Act Outrageously Obnoxious
He can be combative, argumentative, critical, offensive, rude, dismissive and/or a know-it-all.

He Can Detach At The Drop Of A Hat
He shuts down when he’s upset, overwhelmed or afraid of intimacy. He stops relating even though you’re in the same room.

He Tries To Make You Jealous And Then Blames It On You
He comments on women’s body parts. He compares you to other women. He’ll tell you whom he’s attracted to.

He’s Undependable
He lies. He doesn’t follow through on what he tells you. He doesn’t call when he says he will. He cancels on you.

Feelings A Malignant Man May Induce In You

The following are the feelings you may experience when you’re relating to a Malignant Man:

This is an excerpt from “Don’t Text That Man: A Guide To Self Protective Dating in the Age of Technology “
– Chapter One: Malignant Men