You are here: Home » Dating Advice and Tips » Dating and Relationships with Kristy » Stop Being Afraid of Being Alone for the Rest of Your Life

Single mothers, we’re supposed to be amongst the strongest and most independent people out there but so many of us live with the fear of being alone for the rest of our lives. Do you live with this fear? Do you feel like because you’re a single mother, no man is ever going to want to get involved with you and your “baggage”?

Someone told me that women like me feel like we’re “running out of time” and we need to hurry and find a relationship. This statement literally made me so angry that it brought me to tears. Why? How could one person’s ignorance anger me so much? The more I thought about it, the more I realized that I am afraid of being alone for the rest of my life. Their ignorance actually had some truth to it and it had struck a very vulnerable nerve in me. Their ignorance also encouraged me to bring this fear out from its dark corner and shed some light on it. 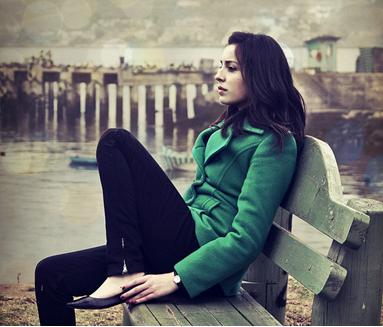 I spent five years trying to convince myself that I had found the person I’d be with for the rest of my life. I wasn’t alone and I would always have this person to be there for me. I had someone to wake up to in the morning and come home to at night yet it was in these five years that I was more alone and scared than I’d ever been in my entire life! I wasn’t alone yet I wasn’t me. To keep this person with me, I had to pretend to be someone I wasn’t. I had to stay at home and be a housewife when secretly, I wanted to go back to school and learn more about people. I had to quit “wasting time trying to be a writer” and find a “more productive hobby” when really there was nothing more productive to me than finding the words to touch others’ lives. I had to keep my hair long when I so badly wanted to cut if off out of curiosity and I had to never ever go outside in sweatpants when sometimes I was so tired that I didn’t really care what I looked like to everyone else.  Every day I was denying the woman that I really am so that I didn’t have to be alone and every day I felt a small piece of me disappear. My biggest fear then was that one day I would no longer be pretending to be someone else. One day the little girl who was so emotionally sensitive that her heart would easily break for others who had grown into a woman whose biggest passion in life is to help others would no longer exist. That I could become someone I’m not just to keep from being alone scared me more than actually being alone did.

Fear is just an illusion.  Fear is a manifestation, an illusion of the mind that can hold you back from reaching your potential. The word fear itself brings about negative reactions when spoken so let’s change the word fear to something more enabling like acknowledgement. Why? Because there are two ways you can deal with fear. You can feel it as something that lurks in the dark corners of your life and has power over you or you can acknowledge it as something that makes you vulnerable. Being vulnerable isn’t a bad thing. It’s what allows you to feel and to relate to others. It’s part of what makes you who you are. Just as my acknowledgements of what makes me vulnerable as a single mom dating allows me to relate and write to all of you. When you look at it this way, it empowers you.

You aren’t alone. Most of you reading this are single mothers, which means you have children and this means you’re not alone! Your children will always love you unconditionally just as you love them. They will always be there for you and they will always be your biggest reason for living. It’s easy to get caught up in our hopeless romantic daydreams of finding the perfect man who will never leave our sides but on the days when I can’t seem to find hope and I feel as though I’m completely alone, I remember that there’s a little boy and girl who will never stop needing me. That’s all I need to remember and the rest of the world could fade away for all I care.

You are alone. One of the biggest reasons I left my marriage was because I couldn’t be myself. There’s only one of you and no one else is like you but that’s what makes you beautiful and unique. You are the only one who has the ability to be your child(ren)’s mother. You are the only who can give to the world what you can give. Don’t ever try to be someone else to win love and security because if you have to be someone you’re not, you’ll live a life much lonelier than one where you’re true to yourself regardless if you find someone else or not.

Never settle! The reason 54% of marriages end up in divorce is because people settle for much less than what makes them happy. They aren’t true to themselves and they are more concerned with finding a functional partnership than a nurturing and lifelong growing relationship. Believe me, I’ve been there! I was so worried about raising my child on my own that when my ex-husband told me he wanted to get married now that I was pregnant; I saw it as the beginning of a fairy tale life. But I wasn’t truly happy. My fear of being a single mother and doing it on my own far exceeded my desire to be happy. It took me five years to learn that settling for cheap security in the form of a ring and marriage agreement wasn’t good enough for me. Do not be so afraid of being alone that you settle for someone who doesn’t love you for who you are or for someone you don’t truly love. Remember, your fear is something that can empower you and bring you true happiness. It’s better to be alone and happy than married and miserable.

So what did I say to the person who placed me in the cheap stereotype of the older (I’m 35) single mom who’s in a hurry to secure a relationship? If I was that concerned with “running out of time”, I’d still be married but I’m not because my happiness is more important to me than being alone. So if I end up being “alone” for the rest of my life, it’s because I never settled for anything less than what I deserve. Right now, I’m completely single or as so many say “alone” but I’m happy! I wake up in the morning and I remind myself of what I do have and not what I don’t have and what I do have is all I’ll ever need to be happy so if I never find a man to share it with at least I’ll always have my happiness.