You are here: Home » Advice and Tips » Who Gives a Damn About Single Mom’s Anyway 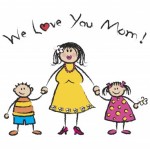 Our kids love us as we are. Is sad that many others can’t.

Before I begin I want to let you all know how much you matter to me.  You matter not only because like you, I too am a single mom, but I know many women in your position.  Being in this space is not easy and it’s so discouraging to constantly see and hear things being blamed on single moms.  I often wonder if we have so much power why we get paid less, work more and are in charge of fewer decisions.

We are not the single reason for destruction of today’s world. Society must take a collectivist responsibility for the downfall of today’s family which contributes to violence in America and across the world. Our value systems as a whole have unwound and it is obvious by much of what we see in print and on television.  You as a single mom are still the salt of the earth. Without you there is no flavor of life and you are the portal from which life begins. To that end I celebrate you and offer you but for the rest of the world we wonder…….Who Gives a Damn About Single Mom’s Anyway?

For every 9 ½ times out of 10 I hear a story about a single mom it’s negative.  We are  called baby mama’s, drama queens, bitter, chicks with attitude and even blamed for every child who has gone wrong when they don’t have a father present.  Studies are done professionally and unprofessionally. Everybody is critic!  We are blamed for welfare  and food stamp burdens and often for ruining the lives of men who would have been fine had we not gotten pregnant. We are stupid for trying to help men we love if they’re down on their luck and too independent when we set high standards because we want more for our children and ourselves. And in addition to all of that we are supposed to be psychics because EVERYONE knew the guy we had a kid by was no good but we should have seen that right?  People are taken advantage of by scams every single day but they’re not blamed for not being smart enough in most cases yet single moms are!

With all of that how on earth is a woman supposed to have even a shred of positive self esteem?  Additionally with all of these negative stereotypes has anyone bothered to think what impact all of that would have on our abilities to mother our children effectively?  Oh that’s right, because they’re in a one parent home they automatically qualify for the school of “guaranteed screwed up kid” right?

Here are some facts the official and unofficial media does not present when discussing these horrible, useless single moms we are supposed to be:

Raising kids is hard even if you have a two parent home; but, when you have a society so self-absorbed they refuse to take a collective approach to accepting responsibility for failing all of our children someone becomes the scapegoat. In America single moms get a horrible rap but here are is our reality:

Single mothers are the strongest people in the world if you ask me.  We are also undervalued, misunderstood and damn tired! Even those of us who are at home don’t just sit there. Gone are the days of welfare recipients just sitting around doing nothing. The US has made sure these young ladies either go to school or work. If they don’t, there are no benefits but we still get blamed for collecting more welfare than anyone else and not deserving it while the facts often prove that wrong.  I’ve been fortunate to never have been on public assistance but know many who have and they don’t love it!!! They hate it and wish they could do better but every time they try there’s a sick kid or worse their own sickness from stress that gets in the way.

Please stop giving single mothers a bad name. We are stressed women who are over worked, underpaid and our homes are understaffed! We rob Peter to pay Paul, wait for child support checks to come that often don’t or  aren’t enough and find ways to feed kids who can’t wait until next payday to eat. And yes many are angry but if you had to do all of this and were blamed for the downfall of the entire country because of your supposedly unruly, unfortunate children you would be too!  But who gives a damn about single mothers anyway right?

Aleasa Word is a certified professional life coach and small business consultant specializing in emotional intelligence modeling to assist others seeking growth and change in their decision making abilities for professional growth, personal growth and increased wealth in the second chapter of their lives.  She is a motivational speaker and workshop facilitator for various youth and adult development programs as well as a domestic abuse survivor.  Some of her signature programs include From Diagnosis to Living™ a coaching program for families living with severe food allergy and anaphylaxis, Chapter II Coaching for Men ™ and the Words of Love Plan™ coaching for those ready for pre-relationship planning. She has spoken to both women and men’s groups nationwide encouraging people to let Chapter I of life go and move on to Chapter II. She serves as a frequently requested contributor for numerous online publications has been work featured on Uptown Magazine Digital, Women’s Day Digital, Today’s Dietician, Allergy & Asthma today and others.